For the second time this year I head to New Orleans. This time I was on a vacation, I finally took some time where I didn’t have to be anywhere, so I didn’t have an art agenda.  However, my one priority was to find Banksy from when he did a “residency” there.  I had also been following his month in New York and am interested in the messages that he wants to leave with his graffiti.

It wasn’t hard to find.  I just googled Banksy in New Orleans and found out that he was in New Orleans three years after the Hurricane Katrina, in 2008.  I easily found Umbrella Girl still existed in Marigny neighborhood.  Considered to be one of his most poignant pieces from this series, the umbrella is supposed to protect her but instead is the source.  It had plexi glass over it that was broken through, left with a note PLEASE DO NOT COVER written in marker.

It was in an lower class neighborhood, in fact on the corner on an empty building, at a bus stop. This is an important factor for me, it really shows Banksy is trying to bring art to the people, trying to discuss their struggle. 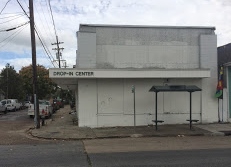 December 2013:Umbrella Girl was vandalized but protected by the partial plexiglas that was covering it

February 2014: UMBRELLA GIRL WAS ATTEMPTED TO BE REMOVED FROM THE WALL AND STOLEN

Photos taken of the guy.  Apparently he covered up the area to be in private.

Apparently identified later to be Christopher Sensabaugh from LA.

I’m lucky she still exists.  A total of fourteen pieces were made but only a couple remain today.

Just as recently as July 2013, A Girl Frightened by Rat was covered up by graffiti.  The tag obviously intentional, bearing the words “real graffiti”.

Emily Ardoin documented the pieces in 2008 and again in 2010, finding most of them gone. 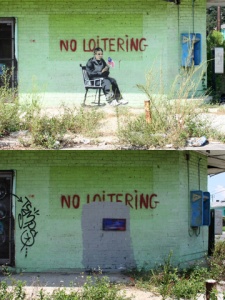 Yet someone began documenting the removal of some of the pieces as early as July 2009, about 9 months after they went up.  This piece “Bush” was also intentionally covered up.  Besides the threat of vandalism by taggers, Banksy had a war with the Gray Ghost.  A man committed to the removal of graffiti in New Orleans, his name comes from the uniform gray paint he uses to cover up the walls.

In response, he became a subject of some of Banksy’s work, depicted as removing the color from the landscape.

While my intention in New Orleans wasn’t art related, but as usual, I couldn’t help but find images relating to one of my on going bodies of work.  Salvation Everywhere is a project I have been working on for the last year.  It is about being bombarded with religion everywhere you turn.  Everyone wants to save you.  If you perform 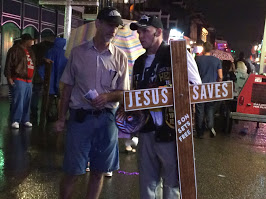 certain rituals, such as prayer, confession, or attending mass, you will be cleansed.  My ideas primarily form around this concept of ritual and repetition that drives people’s behavior.  My second multi media series, it will be composed of sculpture, installation, sound, and photography.  The images are what I found everywhere in New Orleans.  Religion seemed to be embedded everywhere, including in and around the debauchery on Bourbon Street.  I have been randomly capturing images of religion that exists everyday, everywhere. It has been a very interesting project to work on,

However, to collect the amount of found items and images I would like to present will take quite a while longer.  Many of my projects take a

year or two to complete.  They are normally larger in scale and generally require much contemplation,  Working on my art has really taught me the virtue of patience.

New Orleans is a city of mystery and beauty.  There is much to explore, from art to the streets.  Any visit here has left me with unique experiences.  Hopefully next time I visit I can dedicate a little more time to art.  Although with all the inspiration I found, I consider this trip to be very successful art wise.