Weekend with Godard and Graffiti

My friend invited me to head to Austin to see Weekend, 1967 by Jean-Luc Godard.  Having seen a few of Godard’s films, this was a new one for me.  A great director of French New Wave, I always enjoy watching experimental film.  We take the Megabus, a bus service that has expanded their market from the East Coast into Texas.  For less than $5 round trip for both of us, it is an easy and worry free journey.

Weekend is showing at the Paramount Theater, a beautiful and classic venue, located in downtown Austin.  It’s a nice experience viewing a movie here.  Playing with the convention of both the plot

and editing, Godard gives a small portrayal of the broken and fragmented minds that covet money and possessions over the value of life.  Roland and Corinne are a married couple taking a trip to collect an inheritance.  Quickly understanding there is little else they care for, they attempt running over pedestrians, nonchalantly walk through dead bodies, and have a disdain for even each other, as they plot the death of one another.  Throughout the movie, Corinne collects clothing from each event, changing her outfit several times.  This is a great trailer for Weekend, the entire movie done in this random sort of format.  Flashing words, inappropriately played music, and including the breaking of the picture reel at one point, are all Godard’s stylistic way of portraying his observations of society. This is another fantastic collage of Godard’s imagery: Original French Weekend Trailer.  While no dialogue is in the beginning of this clip, the silhouetted figures are a great representation of the dead, emotionless conversation they are having, illustrating their feelings for everything and everyone, including each other.  Roland i 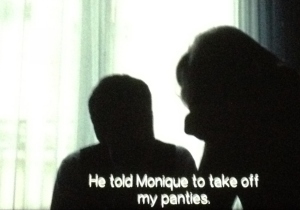 s very disinterested as Corinne describes a threesome she had, asking her only “and then” in a bored voice and “is that all.”  Her casual body language in this still, reflects her careless attitude as well, her head propped up by her hand.  Although, I wish this trailer had subtitles to understand a few parts.  The first young woman covered in blood and screaming is yelling how her rich, dead  boyfriend is the one worth living, the life of a poor peasant is worth nothing.  Another crash, the cars are on fire, and the only time Corinne is screaming, she is hysterically shrieking “My purse! My purse!”, as Roland rolls out from the burning car.  And at the end, when she is eating, she is told she is eating her husband.  She calmly asks for a second helping to go, for her to eat later.  Ending the film with Fin de Cinema, the End of Cinema, this was also the last film Godard did in this manner, choosing to focus on a documentary style. Because I always love hearing German, here is a another clip I found, Weekend Dubbed in German.  Why am I not surprised that this consists mainly of her taking a bath?  Well, it’s perfectly natural as the portrait she is imitating suggests.  Even though the camera is focused on Corinne as she bathes, the entire time Roland is lecturing her, the only nudity is the portrait hanging behind her. If you’re really interested in Weekend, here is the famous Weekend Traffic Jam Scene With Commentary that brings the story to a halt and lasts seven minutes.  It is discussed how Roland and Corinne are breaking the rules, an example of how they treat societies civilized mores “visual variety”.  There is also a longer 15 minute clip, with two great monologues juxtaposed with an interesting choice for imagery. Update: Weekend has been added to the Criterion Collection!  If you want to watch amazing movies, they are usually released by Criterion or Janus Films. Since I didn’t plan this weekend trip, I had no art itinerary planned.  But walking down Congress, we passed the Mexic-Arte Museum that was advertising a graffiti show, so we had to stop in.  Having never been in here before, I was impressed with the layout, very spacious – a great place to exhibit.

Walking into the exhibit, the first wall is taken by a huge pop mural, grabbing my attention immediately.  I have always been a fan of pop and Andy Warhol, particularly loving the bright, bold colors.  Not one for subtly myself, I appreciate not being afraid to express something in a loud manner.  The subject matter always intrigues me.  Usually comments on society, I think it is very clever to pick up on everyday thoughts and imagery that has seeped into our subconscious and realize that even though we are bombarded with this now, it is actually a fleeting experience that is unique to our society at this particular moment.  I love that art can actually document something as intimate as our attitudes.  While a time capsule may preserve history and reveal many things, pop takes it in a different direction.  Loud, brash, and unapologetic, it has always stated the obvious right now.  Focusing on subjects like commercialism and consumerism, these pieces force you to contemplate the same things that overload your brain everyday, hopefully, making you aware and rethink the things that are constantly blurred in the background of everyday life, buzzing around you.  I am very interested in the fact that a graffiti exhibit is making my thoughts go to Warhol and his philosophies. 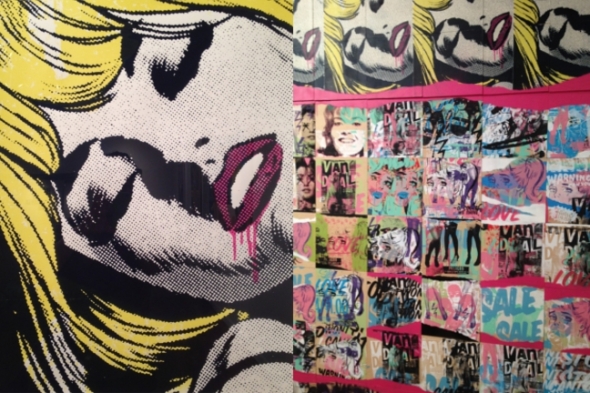 I recognize the work of another artist in the show, Miguel DonJuan.  It’s weird because the imagery is very different than what I’ve previously seen of his work.  In fact,

there is very little exposed wood, normally characteristic of his pieces.  But there are masked faces and graffiti, and although done differently, they still seem familiar to me.  The work still seems to deal with the topic of concealed identity, a particular issue for graffiti artists.  In this series of work, the figures are animals or donning an animal mask.  This work incorporates some words in Spanish, another varied element, I normally see his work as referencing other cultures.  He was in the Graduate program at UTSA when I attended there.  I have seen his work under Carlos DonJuan, Carlos SourGrapes, and now Miguel DonJuan.  I’m not sure why the use of different names, although his bio explains he is part of the Sour Grapes Collective.

There is an interesting piece by Niz, I believe the only solo female artist in the show.  Created with aerosol paint, I love the use of an old window as the object to directly paint on while also framing the work.  There are so many windows already in my collection…It’s nice to see old materials being incorporated into art.  This particular piece is political, discussing current concerns about the border.  Old, weathered items can help illustrate a mood or certain points you are trying to make.  A new window wouldn’t suggest an issue that as been there for a while, having a history. More images from the show by Origin of Cool. Since my friend collects vinyl, we head to End of an Ear, a fantastic record store.  Interestingly enough, we run into an album with the artwork of one of the artist that I represent, Linda Arredondo.  It is always great to see artists I am working with have their art exposed to different viewers. This piece was actually purchased at Justiceworks, I remember their farewell show late 2011.  Designed by fellow San Antonio artist, James Woodard for the band The Grasshopper Lies Heavy.  This was from her Monsters in Love series of mixed media pieces. 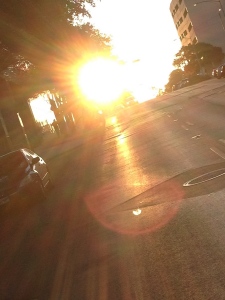 Austin is a fun little town just a jump away from San Antonio.  I love that I can change scenery so easily.  As usual, I packed quite a bit into an overnight trip, experiencing film, art, and music here.