As an artist and curator, I am always searching for new artists to work with.  I have attended the East Austin Studio Tours for a few years, but for the first time, they are hosting the West Austin Studio Tours.  Only about an hour drive from San Antonio, I will always try to take advantage of an opportunity to meet a lot of artists and see their work all at once.  Huge open studios like these often have over one hundred artists participating.  Another perfect day for exploring art! 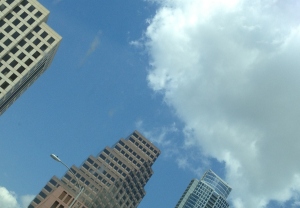 My first stop is to see Ana Fernandez at Women and Their Work.  Real Estate and Other Fictions, is a show of her large scale paintings.  Fernandez is a native Texan from Corpus Christi, currently living and working in San Antonio.  Depicting common San Antonio scenes, one starts to realize it may not be so common after all.  It is a unique city that creates its own culture, with a strong past.

While being a top ten city in the country for population, it often feels much smaller, with all its eccentricities.  Fernandez captures these moments, reminding me these scenes probably only exist here.  She was able to make it up to Austin for the open studio, and besides her paintings, she was running her Botanica.  Selling powders and potions to ward off controlling people and more modern bruharia to have someone unblock you on facebook, I love Fernandez’s sense of humor and how she embraces the culture I grew up in and sometimes take for granted.  While botanicas don’t seem to be around anymore, they still exist, low key and hidden in the neighborhoods, much like the scenes she finds dispersed throughout the city.  Fernandez is giving these beliefs a make over, refusing to let old traditions die.  Looking at her paintings is like driving around in the neighborhood.  Even if you haven’t seen the exact house she has decided to paint, you know you’ve still seen this house, know these people.  Some of them are in my family.  Women and Their Work was a fantastic, huge space.  It was a great location to showcase such large paintings.  They also had a fantastic gallery shop with interesting books and art.

One of the best studios visited belonged to Adreon Henry and Jennifer Bradley.  Both living quarters and art studio for the couple, it was quintessential Austin.  Their unique space had a living room floor covered in laminated book pages, while art, books, and collectibles were displayed everywhere.  The printing equipment was an impressive set up in the side room.  Henry was an interesting guy, into experimental music, books, and seriously making art.  His house was a bed of creativity and inspiration.  A drink was offered as we talk about the Bruce Haack vinyl playing.  We discussed putting on shows in alternative locations.  He had held one in an abandoned convenience store and I talked about Seven Minutes in Heaven at the Fox Motel.  Artists are the most interesting people.  Henry worked in many types of media, including painting, drawing, music, and mixed media.  His sense of humor comes out as he draws alien figures on found art.

There were a number of portrait painters that I was surprised drew me in.  I felt these artists took something as traditional as a portrait and kept it

interesting, which is often hard to do.  I love the moments that Karen Offutt chose to depict, one invading a private moment as this girl sneaks some food while she cooks.  The expressive look on her

face as she is caught is what makes this painting stand out for me.  Painting everyday scenes of everyday people can be a tiresome subject if there is not some kind of excitement behind it.  I came upon H. Chase Seal’s work by accident.  I don’t believe it was listed on the tour, running into it as I stopped in an interesting looking store.  The large, closely cropped portraits drew my attention.  Also included was a pastel drawing I liked.  While much more minimal in medium, it was just as expressive. My head was already starting to curate, a contemporary portrait show would be nice.  Portraits can often be over looked as a contemporary subject matter, but these artists were proving otherwise.  I always enjoy seeing artists who love what they do.  That should always come across clearly in their work. But the most fun and interactive piece was by far the Quick Draw Photo Booth by Aron Taylor at Big Medium.  Dealing again in portraiture, this was definitely a new concept.  Just a loud voice coming from a speaker on this home made photo booth was inviting you in for a fun time.  Not knowing what to expect, my friend and I decided to participate.  I didn’t realize until after I was in the booth, that we were not alone.  Hidden behind the camera wall, we could not see the artist as he directed our “photo shoot”.  A cowboy with a Texas draw talked to us the entire time, making this such an engaging experience.  This guy was hilarious!  Combining art and comedy, photography and drawing, this was quite a memorable booth.  Everyone’s experience was completely unique, as each participant was given different instructions.

For our shoot, we were playing the role of celebrities, expressing moments with paparazzi hounding us, and ending with the death of the celebrity.

I laughed the entire time and enjoyed that this was something I had never experienced before.  Still not knowing what to expect, he told us it took about three minutes to develop the photos and didn’t want to burn himself with chemicals.  We continued to walk around the gallery space until he loudly announced they were done.  This original drawing on the right is what the photo booth spit out, in traditional fashion.  If I ever curate this portrait exhibit, I would love to include Taylor.  Someone like this definitely shakes up the typical perceived notion of portraiture. On my way out of Austin, I made a final stop at Art on 5th, to see the art work of Dr. Suess.  While I have known this gallery has been representing his work for a while, this was the first time I ever paid a visit.  I have always liked his art and have a book, The Secret Art of Dr. Seuss,  that included images of most of the work on display.  He has always been a

playful illustrator and I find his other works just as whimsical.  Unmistakably his work, these are entirely new worlds Seuss has created, often exposing a much darker side.  There are no rhymes to happily bring a conclusion to these works.  Yet, these creatures live in this colorful, fantastic existence.  Dr. Seuss will always be a childhood favorite of most people.  It’s great to connect with his “secret” art work, not intended for children’s books.  It is always a pleasure to lose yourself in these exotic places that only exist in the mind of Dr. Seuss. 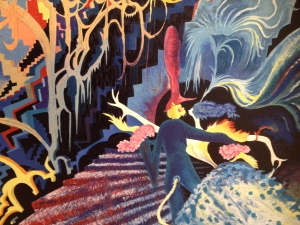 Amid the many pieces from Dr. Seuss, other artists are represented by Art on 5th.  One landscape painter in particular caught my attention, Debbie Mosely.  I was drawn to the atmospheric mood she was creating with her paint brush and drips.  Looking at her pieces, I felt that I had often been there, in that desolate place, even if just in my mind. The West Austin Studio Tours were a fantastic experience.  A little different from East Austin with more gallery spaces, but the creativity continues to flow on the other side of IH-35.  Austin is greatly known for their music scene, but this weekend I got to take a closer look at the expanding art community and it was a great experience I hope I get to enjoy again.  I am already waiting for the East Austin Studio Tours in November.